In September 2009 Acti-Zyme in partnership with Dave Kempen started the reclamation of the Chegutu, Zimbabwe, municipal sewage pond #3. The Town of Chegutu population has a population of 50,000, and this system is one of two plants serving the whole population.

This project was initiated to show the effectiveness of Acti-Zyme in Zimbabwe. The Town of Chegutu was chosen as a test site because it possibly had one of the the worst cholera outbreaks in Zimbabwe in 2008-2009. Chegutu was set up by the government as a control center for all cases of cholera in the Mashonaland province.

Pond #3 had been neglected for many years. The continued sludge loading the system became 100% full and lost it’s capacity and ability to treat the influent. With this sludge overloaded system came the over growth of vegetation and system failure.

It was at this point that Dave Kempen and Acti-Zyme started the process of reclamation. The initial information outlined the system dimensions as 50 m x 50 x 3 m deep. With this information and the visually apparent overloaded system the project started.

The inflow and outflow pipes of  pond 3 were restricted initially for the purposes of this test trial, allowing Acti-Zyme to work in a closed system. Under normal circumstances, the entire lagoon system would be treated. The applications began at by cracking open the sludge layer and applying under the dried crust. Also applications were applied at the inlet into the pond. Shortly after the start of the project, the inflow and outflow pipes were fully opened with flow rates, greater than 2 mega litres/day, of screened raw sewage flowing through the pond.

The application rates used in this trial were as follows:

4kg/day for month one.

This is the system prior to treatment: 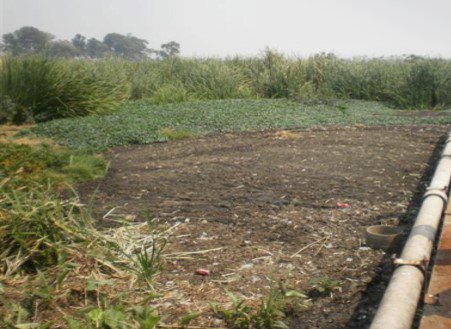 After a few short months the applications of Acti-Zyme transformed the system and liquified the entire sludge that had been built up for years.

Here is the system after the project was completed: 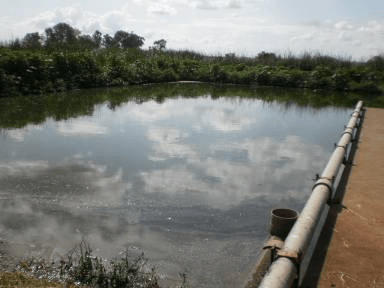 This project successfully removed the overloaded sludge and returned the system to its designed capacity. The system was measured again to obtain verified dimensions and it was determined that pond #3 was in fact 4 meters deep instead of the 3 meters deep which was estimated at the start of the project.

This project shows that a system that could be deemed worthy of abandoning can be restored without expensive new infrastructure or expensive mechanical removal. No severely overload system is without potential for recovery with Acti-Zyme.